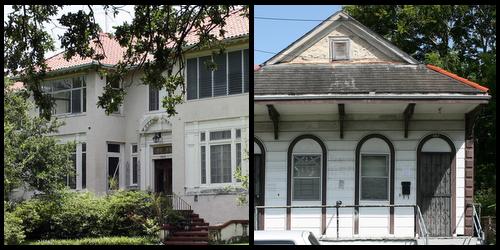 One of these houses was recently approved for demolition, and one was deemed necessary for preservation. Want to guess which is which? (Photos via Preservation Resource Center, prcno.org)

Watching from the sidelines these last few weeks as New Orleanians applaud or boo proposed demolitions throughout the Uptown area, I am once again left scratching my head from what seems to be a certain sense of inconsistency.? Here’s why. 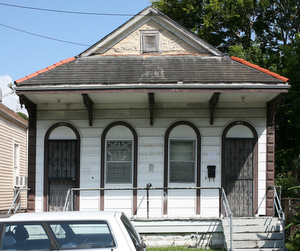 Recently a little ol’ shotgun in the 4500 block of South Saratoga, No. 4517 to be precise,?generated a heated discussion largely in opposition to the removal of the dwelling.? Yes, it’s a quaint old building.? Yes, there are literally dozens upon dozens and again, dozens more, comparable to it.? Unless you live nearby you’ve likely never seen this one in particular, and you may not ever happen across it, because frankly South Saratoga is a relatively sleepy street and the 4500 block in particular has little noteworthiness.

The demolition dialogue played out for days in emails that cc’d everyone from neighbors to neighborhood associations, to City Council and well, to me.? Basically, the takeaway was that the demolition should be denied for two reasons. ?One, an old shotgun has more character than whatever presumably inferior construction might replace it, and two, renovating the space would be much less expensive than demolishing it. ?To be sure, there was a certain level of “we know better than you, Mr. Property Owner,” both from the impact on the neighborhood’s?visual field to the bottom line of cost differences between renovation or demolition-construction. ?The request was denied. 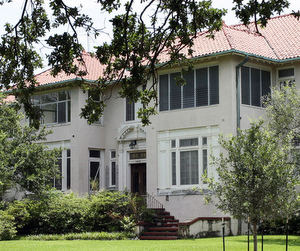 Next up, a ginormous and unremarkable behemoth of sticks and bricks sidled up to the streetcar on St. Charles Avenue was the subject of a similar demo request by its owner, Mr. Goldring. ?The address is 5428 St Charles, about a mile away, a neighbor of roughly 11 blocks to 4517 South Saratoga. ?The home appears from plain sight to be in fine repair, and is in a highly visible location. ?It must be the orange to South Saratoga’s apple, however, as in this specific case the request for demolition was approved. ?Yes, approved. ?Last week, fellow columnist Owen Courreges wrote a well-received, entertaining and informative piece on the matter entitled “How to tear down anything in three simple steps.” ?In reading it last week I initially refrained from comment, but then it struck me: what real difference is there in these two fruits? ?Both owners sought approval to tear down their own structures. ?Neither is amazingly historical or exceptional in execution. ?But both demolitions will (or in 4517 S Saratoga’s case would have) change(d) the visual field as well as likely be cost prohibitive.? Is this a consistent and level demolition playing field we’re witnessing? ?I say no. ?Why then is this allowable?

Marvel Comics used to publish a series of stories that posited alternate realities to favorite characters and storylines called What If? ?What if Spider-man joined the Fantastic Four? ?Things like that. ?And so I wonder: What if? 4517 South Saratoga and 5428 St. Charles were to swap ownership? Would the outcome have been the same?? What would be different? ?What would be the same?

At the end of the day I am a preservationist. ?Ask anyone. ?But I’m also all about giving people — everyone — the opportunity to accomplish their goals, including self-chosen demolition. ?In these two cases, I think the outcomes are distinctly different due to socioeconomic circumstance and perhaps we should leave it at that.? But perhaps there is another solution: Mr. Goldring, out of the goodness of his own heart and in a sharing spirit, might be willing to assist Mr. Bartholemew in appealing his denial, so that he too might experience the joy of accomplishing a demolition.? What if that happened? ?Hmmm, what if, indeed.

FOOTNOTE: At long last the basketball backboards have appeared in Samuel Square! Does anyone know who, when, and how this took place, so credit may be given where credit is due? Once we have a working water fountain again, the park rehab might just be complete!

Jean-Paul Villere is the owner of Villere Realty and the Du Mois gallery on Freret Street and father of four girls. In addition to his Wednesday column at www.beat-the-banker.com, he also writes an occasional real-estate blog at villererealty.com and shares his family’s adventures via pedicab on Facebook and Twitter.