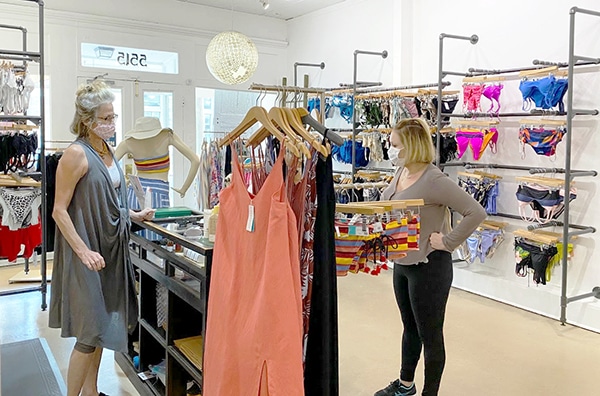 Resilient Magazine Street merchants like Juliet Hainkel Holton and Desiree Petitbon are making final preparations for reopening their two shuttered shops on Saturday (May 15). The co-owners of the trendy boutiques Basics Underneath and Basics Swim & Gym, 5513-15 Magazine St., Holton and Petitbon were inspired to tiptoe into retail 21 years ago after a fateful trip to France. They realized a customer base existed Uptown for properly fitted foundation garments that are popular during the Mardi Gras season as well as for weddings and other special events throughout the year.

What began as a fun little sideline blossomed into their main job. Through hard work and dedication, the two single moms steadily built a successful business that brought in more than $1 million annually until COVID-19. Now the duo is re-imagining everything, including their inventory, in an effort to attract enough shoppers to keep their doors open.

“The two months that we were closed was an opportunity to freshen up the space by repainting both shops ourselves,” Holton said. “We also performed a deep cleaning of all surfaces.” Holton said they plan to open safely by reducing hours of operation and limiting the number of customers at any one time.

Face coverings are essential for staff and customers. “For now, we will give masks to customers who don’t have them. We also plan on practicing social distancing, have installed hand sanitizer stations and will be wiping down the counters and the credit card machines between every customer,” said Holton. All merchandise will be discounted 30 percent.

Holton’s inventory has always included lingerie, active wear and swimwear plus cover-ups and sunscreen. “COVID-19 forced us to re-evaluate what we were doing. We canceled our March and April merchandise orders and are revisiting what we might buy for late summer and fall,” she said.

Holton anticipates a softer bridal and social season but projects greater demand for active wear and for stylish yet comfortable at-home wear.? Masks will become the “new fashion statement,” Holton says, and she expects to be offering a wide variety for daytime and evening masks very soon.

“I don’t know if everyone is immediately going to come running out of their homes to shop,” said Holton, who just received a loan from the Small Business Administration.

The two kept in touch with customers by marketing $25 grab bags, which she and Petitbon personally delivered, as well as through online and Facetime shopping with curbside pick-up.

“People were looking for ways to support local boutiques just like they were local restaurants,” Holton said. “We will continue deliveries and curbside pickup to keep us in front of people’s minds. We can’t compete with Amazon.”

Holton hopes to rebuild her business quickly so she can rehire her employees. For the short term, she and Petitbon will be the only workers. “We definitely want our employees back. We’ve missed our customers and our friends and are excited to be opening back up,” Holton concluded.

THE BEAD SHOP STARTS BACK UP WITH ONE-ON-ONE APPOINTMENTS 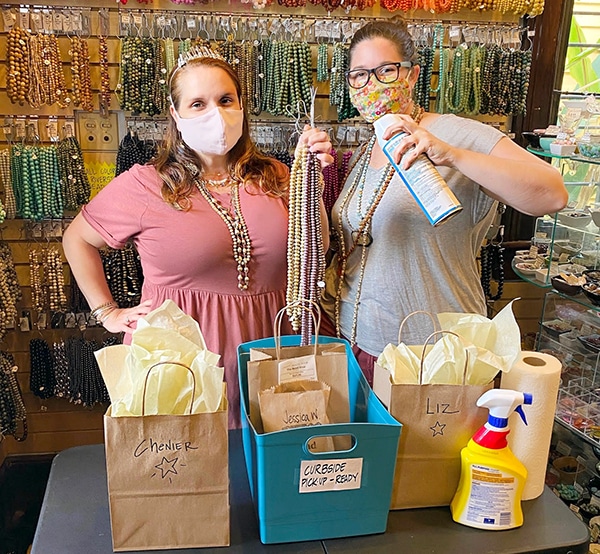 Another long-time Magazine Street business that is adopting a more phased-in return is The Bead Shop, where customers can place a special order for a handmade one-of-a-kind creation, or established beaders can purchase traditional and exotic supplies from around the world.

Open only for curbside pick-up only during the last two months, the business has not met pre-COVID projections but owner Georgia Wilson remains optimistic.? “We’ve been on Magazine Street for almost 28 years and have no intension of going anywhere anytime soon,” she said.

“The safety of our employees and customers is more important than being (fully) open to the public. Because of this decision we will begin our reopening with one-on-one shopping appointments, which will allow our customers to safely come into the store with a mask covering the nose and mouth, a requirement for both employees and customers,” Wilson said.

The Bead Shop also made physical changes, such as installing Plexiglass screens and marking off the floor for distance reminders. During the past two months, staff members tackled a dream project – building a new shop-able website, which is still being worked on each day. “Using the shop’s new cellphone (504-330-7476), customers can text their shopping list or project inspirations. We can pull all their supplies and send them an invoice,” said Wilson.

The Bead Shop has been taking appointments for virtual video shopping. “We’ve had a lot of great feedback from customers telling us that they’ve seen merchandise that they never noticed before.” Located in an intimate, light-filled shotgun house, it would not be unusual for 20 or 30 customers to fill the space during a normal shopping day.

“Sadly, this is simply not safe right now. Moving to appointment-based interactions will allow us to give people the excellent service we want them to have while maintaining safety,” Wilson said. “Beads are fun, but nothing is better than being healthy.” 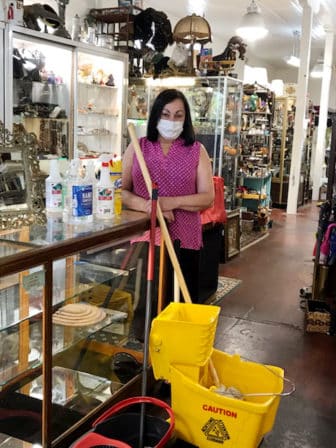 For several weeks now the 55 vendors who share space at one of the city’s oldest and largest antique emporiums, the 7,000-square-foot Magazine Street Antique Mall at 3017 Magazine, have been sprucing up their booths in anticipation of Mayor Cantrell lifting the city’s stay-at-home order.

Open for 45 years, the business offers an eclectic mix of such collectibles as antique furniture, jewelry, linens, clothing, glassware and even old Pyrex.? New merchandise like traditional Mardi Gras masks is also available for out-of-town customers.

Mall manager Karen Brown has overseen a thorough cleaning of the property and created a set a new rules requiring mandatory masking and hand sanitizer practices for everyone entering the building. She also put up Plexliglass shields to “protect us and the shoppers,” Brown said.

All this work does not mean Brown is ready open on May 15. In fact, Brown, 71, has decided to delay opening until June 1.

“I want to see if there is a rise in cases. I have dozens of employees and vendors to worry about, so I decided to air on the side of caution,” Brown said.

Brown also hopes that more shops on her block will reopen. Her neighbors H. Rault Locksmiths and the cigar shop Mayan Import Co. never closed.? Joe K’s restaurant has been open for take-out only.

Potential customers have been looking in Brown’s large picture windows every day. Her merchants have been selling online, which will continue after reopening.

“I live in Jefferson Parish, and I see the lack of social distancing. It worries me,” she explained. “It was a hard decision to make. I kept going back and forth. In the end, I think waiting until June 1 to open is the right decision for us.”

Danae Columbus, who has had a 30-year career in politics and public relations, offers her opinions on Thursdays. Her career includes stints at City Hall, the Dock Board and the Orleans Parish School Board and former clients such as District Attorney Leon Cannizzaro, City Councilman Jared Brossett, City Councilwoman-at-large Helena Moreno, Foster Campbell, former Lt. Gov. Jay Dardenne, former Sheriff Charles Foti and former City Councilwomen Stacy Head and Cynthia Hedge-Morrell. She is a member of the Democratic Parish Executive Committee. Columbus can be reached at swampednola@gmail.com.