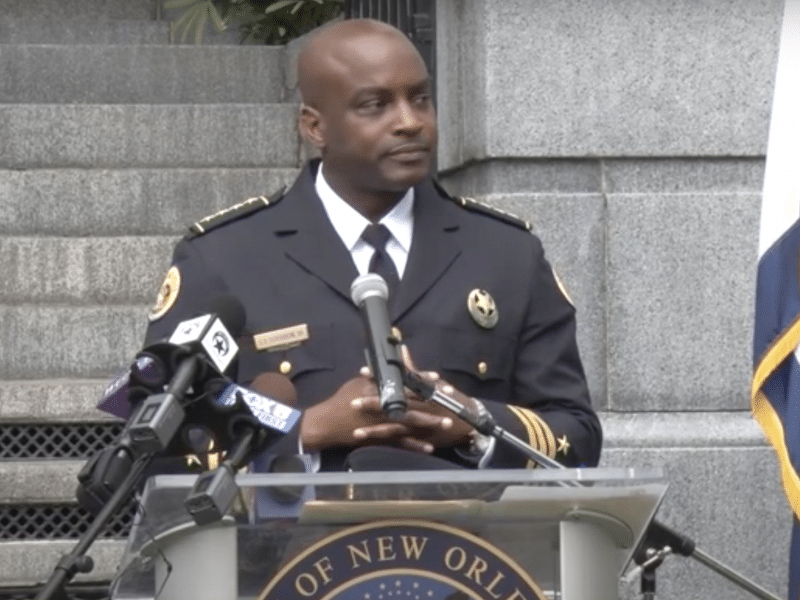 Metropolitan Crime Commission President Rafael Goyeneche said yesterday that NOPD Superintendent Shaun D. Ferguson deserves the highest accolades for his handling of the department since the pandemic and Black Lives Matter protests began. “Chief Ferguson has been dealing with an issue that no police chief has had to deal with in 100 years,” Goyeneche said. “In the context of New Orleans, look at some of the unrest in other cities around the country. I want to give him nothing but an A as to the way things have gone here. “New Orleans had our George Floyd awakening 15 years ago on the Danzinger Bridge.

A woman was robbed at gunpoint early Monday in Central City, the New Orleans Police Department reported. The 44-year-old woman was approached from behind on Willow and First streets at 4:06 a.m. on March 25, the police report said. The armed man grabbed her in bear hug and took $20 before fleeing. The suspect is described as a black man, about 5 foot 10 inches and stocky, with flat-top haircut and wearing a dark hoodie. Anyone with information about the incident or the suspect is asked to all the NOPD Sixth District at 504-658-6060 or Crimestoppers at 504-822-1111.

A dump trailer was stolen in the Freret neighborhood, the New Orleans Police Department reported. On Feb. 12, at 2:27 p.m., the victim’s black, 2013 Big Tex dump trailer bearing Louisiana license plate # J580217 was stolen from the intersection of Cadiz and LaSalle streets. The dark pickup truck was used during the theft. Anyone with information on this incident or the identity and whereabouts of the wanted subjects is asked to contact NOPD Detective Sa’Brina James or any Second District detective at 504-658-6020 or call Crimestoppers anonymously at 504-822-1111 and toll-free at 877-903-7867.

A man was injured Tuesday evening in an exchange of gunfire on Delachaise Street, New Orleans police said. The victim, a 20-year-old man, got into an argument with another person around 6:15 p.m. Tuesday, Oct. 9, in the 2200 block of Delachaise Street (near Loyola Street), according to the initial NOPD report. The dispute escalated into a gunfight, and the victim was hit in the left foot and taken to the hospital for treatment, the report states. Further details were not immediately available.

The development saga that started years ago with the displacement of a small Chinese restaurant from the Garden District ended Sunday with the grand opening of an Allstate insurance agency in Broadmoor, the final tenant in the new Green Tea development there. Green Tea was formerly next door to the Blockbuster video store, but after the video-rental business’s demise, plans were announced in 2014 to convert the entire development into a CVS, displacing the restaurant and other tenants. Last year, however, owner Yung Lau finished construction on a new development for his restaurant at the prominent corner of South Claiborne and Napoleon avenues, which then-Councilwoman LaToya Cantrell hailed as an important milestone in the revitalization of South Claiborne Avenue. Over the past year, a Verizon store leased the second unit in Lau’s development, and on Sunday, his wife, Mei Xiao, opened her branch of Allstate insurance in the third and final unit. The grand opening brought out not only friends and well-wishers, but also new District B City Councilman Jay H. Banks, who praised the couple’s work at the corner.

One year after the New Orleans City Council instituted regulations for short-term rental properties, one affordable housing advocacy group has developed policy changes (and eventually a new ordinance) meant to tackle the city’s affordable housing crisis. The Jane Place Neighborhood Sustainability Initiative works to reduce the number of short term rentals around the city as part of a broader effort to increase the number of affordable housing units for New Orleanian. After compiling three years of data into one comprehensive report – title “Short Term Rentals, Long Term Impacts” – the group has established several policy change proposals for the city, as well as calls to action for its residents. JPNSI’s leadership held a town hall Wednesday to present their findings and proposed policy changes. Jane Place staff have been tracking short term rentals for three years using three data sources: data scrapes from Inside Airbnb; the city’s own public permit database; and open records requests from the city’s attorneys office.

A group of four people was robbed at gunpoint on Freret Street overnight, New Orleans police said Friday morning. The victims — three men and a woman, ranging in age from 20 to 28 — were near Freret and Joseph streets around 12:45 a.m. Friday, April 6, when a dark-colored, four-door vehicle approached, according to the initial NOPD report. Two armed males got out of the car and demanded the victim’s belongings, then drove away, the report states. Further details were not immediately available. Anyone with information is urged to call the NOPD Second District station at 658-6020 to speak to a detective, or CrimeStoppers at 822-1111 to leave an anonymous tip that could be eligible for a cash reward.

Suspect arrested in robbery of TJ Maxx on South Claiborne

A man who filled a shopping cart with shoes at TJ Maxx on South Claiborne Avenue and then took it from the store while brandishing a handgun at employees who attempted to stop him was arrested the following day, New Orleans police said. Shortly before noon on Friday, a man walked into TJ Maxx at 2900 South Claiborne Avenue, filled a shopping cart with shoes, then left through the rear emergency exit, according to a NOPD report. When employees confronted him to pay for the items, the man drew a handgun and pointed it at them and continued out, the report states. Around 10 a.m. Sunday, officers with the NOPD Sixth District saw a man matching the robbery suspect’s description and tried to stop him, but he began running away, according to the reports. He threw a handgun away in the 2100 block of South Claiborne, but police closed down the streets around the block and were able to find him and the gun, the report states.

A man was injured in a shooting late Wednesday morning on South Liberty Street, New Orleans police said. The victim, a man in his 30s, was near South Liberty and Toledano shortly after 10:30 a.m. Wednesday, March 7, when he heard a gunshot, according to the initial NOPD report. He realized he had been shot in the leg, so he walked home and was taken from there to the hospital by ambulance, the report states. Further details were not immediately available. Anyone with information is urged to call the NOPD Sixth District station at 658-6060 to speak to a detective, or CrimeStoppers at 822-1111 to leave an anonymous tip that could be eligible for a cash reward.

The Krewe of Bacchus celebrated a major anniversary this year. They made 50, their golden anniversary. With that in mind, most of this year’s floats were gold-themed. It’s “Gold Record” float paid tribute to musicians like The Beatles, Jimi Hendrix, Kiss and more who have been awarded a golden record for their achievements. It’s “Goldfinger” float paid tribute to the James Bond film by the same name.